I didn’t go back for my jacket. I hesitated. Choked. Failed to act. By the time Laney turned back towards the van the idea hit me. I had a jacket we could have used. Happens to everyone…except me.  55 klicks west of Marrakesh and the boy in the middle of the road isn’t doing well. He’s screaming, bleeding, bone showing, and he’s going into shock. 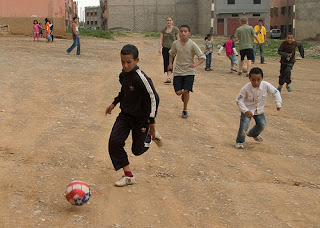 These kids play in the dirt on the side of the road
As the sun sets, the desert cools quickly. He was playing soccer with friends when their ball made an unfortunate pass into a busy road. He probably didn’t even see the large and ubiquitous 1980s Mercedes taxi that creamed him across the pavement. Probably dressed for the pleasant afternoon weather, he was going into shock and the temperature dropping further was no help. He needed something to cover him, something like the sweater Laney brought back from the van. It wouldn’t be till later, on the silent ride home that the thoughts crept into my mind. Why didn’t you go get your unneeded jacket, neatly stashed in the van? Worried you’d get somebody’s blood on it? 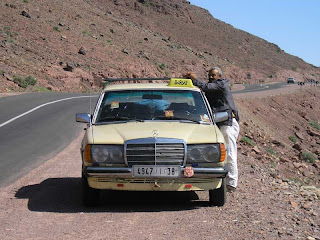 “Youssef!” we were shouting to our guide, over the agonizing screams of the boy, and the paralyzing screams of his mother on the other side of the road.  “What’s going on, why are they holding him like that?!” A crowd of men had gathered and were holding the boy while he writhed in pain.  Finally, after intense prodding of our guide, we realized no one knew what was going on – and our guide was the least bit interested in getting involved.

Of the eight of us, seven were trained as first responders, and never imagined we’d be the tenth, eleventh, twelfth…seventeenth first responders to a scene. At least ten people were already there, none of them with a clue. “YOUSSEF! Tell them to take the rock out from behind his head, let him lay flat as he’s comfortable. He’s obviously in great pain [we can see hip, shoulder and skull bone] don’t force him into a position.” We’re shouting orders and Youssef struggles to process it all and translate it into Moroccan/Berber/Arabic. He doesn’t seem thrilled, but eventually he’s getting through to the group. “When he’s comfortable prop up his feet. Cover him with something, he’s going into shock.” What to cover someone with when you’re in the desert…

The boy’s mother is far across the road, held back by other locals. Clearly, and wholly opposite from American culture, this is not a place for a mother, a woman. By the same token, I sense distrust from the men on scene, now taking directions from two guys and FIVE women via Youssef. Commotion erupts and they’re arguing. No understanding of the language, we understand every word. The man in control now is saying “blah blah blah blah….Americans,” and looking at us for reassurance. We stare vacantly back, but persist with our instructions to treat the boy. “Youssef, can someone call an ambulance? Can we take him to a hospital?” More importantly, do you have a hospital… 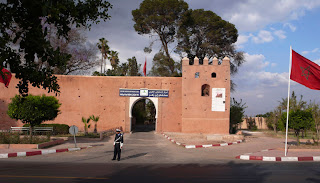 My buddies and I have a rule if someone gets hurt:
"Don't take me to the hopsital, take me to an airport"
The onsite commander is enforcing our directions, and apparently the caveat “___ ___ Americans” is grounds for them to actually carry out the orders. This may have been one of the oddest realizations of someone giving a shit about America. Here are people, most of which probably have never even met a foreigner, do not have TV, don’t know or care who the Kardashians are, but they’re listening to what we have to say. Because we’re American. Somehow they knew we knew what we were talking about, and wanted to help. 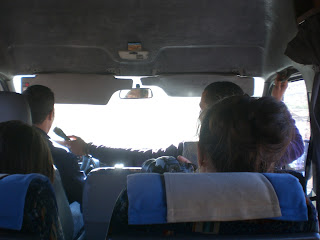 Karaoke in the van 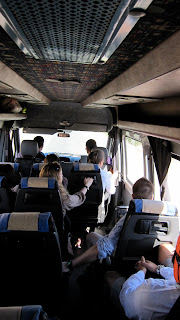 Braced for quality roads in the van

Finally we hear sirens; some semblance of an ambulance is coming for this boy.  “Yellah guys, yellah.” Youssef is eager to leave, and point out that nothing else can be done. Smiles and handshakes are exchanged, even to the girls, and we grudgingly head back to the van. It’s a somber mood in our crew – the same crew who was previously singing karaoke thorough the van’s scratchy speakers. I hope he’s ok. I hope he’ll walk. Now we are the ones going into shock. The van is silent as we ride out the last bit of the journey in the dark. We drive. I think. 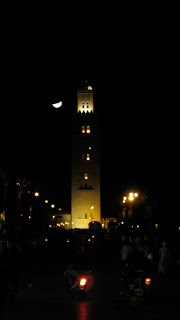 Posted by BackByMonday at 6:19 PM No comments: